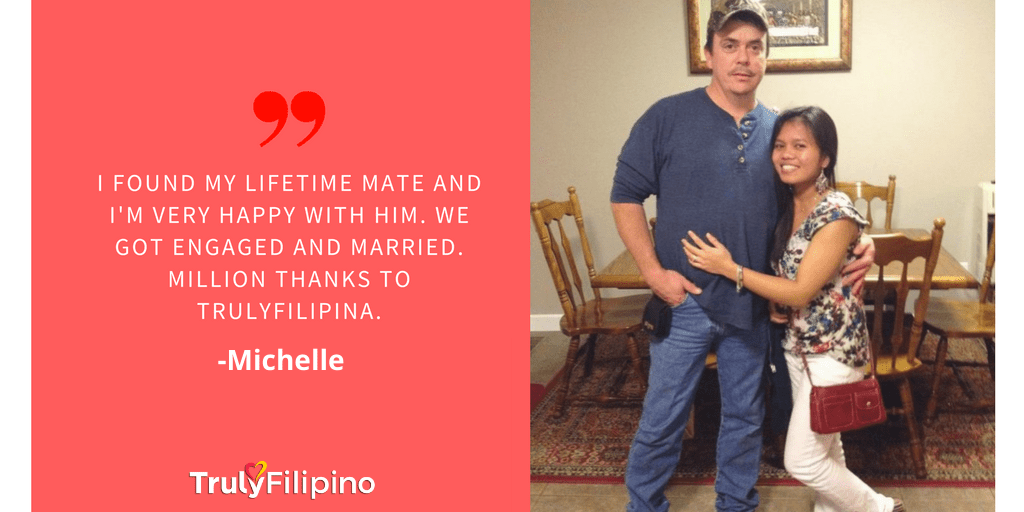 According to the message Michelle sent us, she found her “lifetime mate” on TrulyFilipino and she has never been happier.

As mentioned by Michelle, it all started when she was only randomly browsing on TrulyFilipino when Mark’s profile photo caught her eye. She decided to make the first move and sent him a message. Michelle even shared that she was so ecstatic that Mark replied and as the months went by that they were communicating, both decided to make their relationship official.

She shared that even though she and Mark had their differences, they worked hard to compromise and understand each other just to make their relationship work. They got engaged then eventually got married.

She wishes that all the other members of TrulyFilipino will eventually find their life partner as well. Her advice to all who are still searching for that special someone is to try your best to make the relationship work, can surpass anything. Even distance itself.

“A million thanks to TrulyFilipino”
-Michelle

Distance and differences wouldn’t be a hindrance to anyone who is willing to make their relationship work. As long as there’s compromise, communication and of course, love, any couple could surpass any challenges. Together.

Michelle and Mark’s story is just one of the many couples who met on TrulyFilipino. Join for free and start meeting Filipino singles today!

Note: Original content was slightly changed for length and clarity.